Apparently, accordingly to the Openbox’ default configuration, in a dual-monitor setup, the primary monitor is the one on the left, and this leads to an annoying issue when you use as primary monitor the one on the right, as in my case: in fact, if the monitor on the left is off, you won’t be able to see dialogs popups, for instance the application switcher popup or the virtual desktop switcher.

I’ve been using Jekyll a lot lately, I’m totally in love with it, it’s a simple, fast and brilliant Ruby tool to generate static websites and blogs. Well, this post is not really about Jekyll per se, it’s more likely about the way I use it inside my ecosystem.
If you want to learn more about Jekyll, I think the official website is a good place to start from.

Ok, let’s talk about the way I use Jekyll: I build my website locally, then I push changes with git to my Amazon AWS instance and at the same time I keep a copy of the blog sources on Github available for consultation or forking. That’s it.

Just for completeness, Github itself has a great free hosting service for your site, Github Pages, that supports static sites and Jekyll blogs as well, but I’m already a (happy) AWS user so I decided to host my site there instead of Github Pages.

So this is the scenario, now let’s take a look at the workflow: I push changes both to AWS and Github, then a post-receive hook script on the server builds and publishes the Jekyll blog. 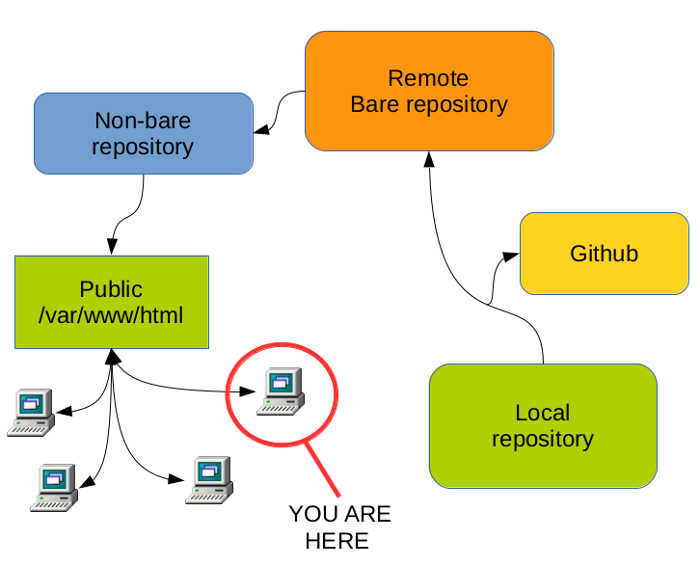 In order to obtain such workflow, we have to:

How I shutdown my Raspberry Pi

I have a Raspberry Pi board and some days ago I decided to use it as a sort of print server at home, excited about the idea of being able to plug the RasPi’s power supply then turn the printer on and wirelessly send it documents from my laptop(s).
While getting ready to put my hands on it and set up the server, a problem showed up: once the print is done, I’d probably want to turn off the printer, turn off the RasPi and possibly unplug power supply; it’s a headless system, so I would connect over SSH and run the proper command to shutdown the RasPi, but what about my mother?

I mean, she’s clearly not a UNIX geek. Without a power button or a point-and-click graphical interface she wouldn’t be able to properly shutdown the RasPi, so she would probably unplug the power supply, and we all know how bad is this practice.

Today’s blog post is about a sample application that uses Web UI and js libraries and shows some information about you on Google+. To retrieve these informations, application uses the Google APIs Client Library for JavaScript.

Funny story: I chose to use Google API javascript client (handled with dart js-interop library) instead of dart client since the latter was outdated and while I was editing the code an interesting project appeared on GitHub: dart-google-oauth2-library by +Gerwin Sturm. dart-google-oauth2-library simplifies the whole authentication process in a significant way, so please consider the following just as an example of how js-interop works.